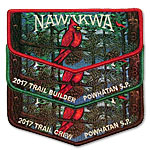 Nawakwa Lodge 3 of Richmond VA recently issued three new flap patches, sharing a common design very similar to their standard lodge flap from 2016. The 2017 design continues to feature a cardinal on a pine branch with tree trunks flanking each side, the left containing the “WWW” and the right an FDL and lodge number. There are slight differences in the new version. The forest area behind the lodge name is a lighter green, the “3” and FDL on the right trunk are more defined, while the “WWW” on the left trunk is less distinct.